QUIZ TIME! Can you answer these questions about Wales?

How good is your knowledge about Wales? Are you a know-it-all when it comes to the land of song? Well, here’s your chance to test your knowledge on Wales’ rich tapestry of history, culture, landmarks and people!

The recently published The Wales Quiz Book by Matthew Jones is the ULTIMATE quiz book on all things Welsh, from history, culture, places and sport to pop and celebrities! Fifty rounds of ten questions, from the simple to the devilishly tricky.

Here’s one exclusive round of questions – lets see how many you can answer!

1. Which part of Wales has a meat-free sausage consisting of ingredients such as cheese, leeks, herbs and breadcrumbs named after it?

a) Glamorgan
b) Gwynedd
c) Clwyd

2. Snowdon is the highest mountain in Wales. How high is its peak?

3. The first vote on the limited devolution of Wales from the United Kingdom took place on 1 March 1979. In it, 956,330 people voted against devolution. How many supported the proposal?

a) Australia
b) England
c) United States of America

6. 23 June 1894 is a day etched in the history of Cilfynydd, as a mining disaster killed 290 men and boys. What was the name of the colliery involved?

7. Julien MacDonald was born in Merthyr Tydfil, where his mother taught him how to knit from an early age. Which Paris couture house appointed him chief designer in 2001?

10. In football, who won a record 13th Premier League title with Manchester United in 2013?

All the answers and hundreds more questions are available in The Wales Quiz Book by Matthew Jones (£3.99, Y Lolfa) – out now! 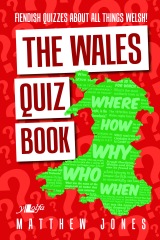